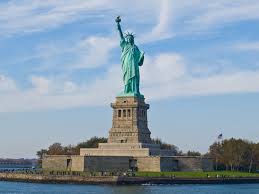 United States, officially United States of America, abbreviations U.S. or U.S.A., by name America,  country of North America, a federal republic of 50 states. Besides the 48 contiguous states that occupy the middle latitudes of the continent, the United States includes the state of Alaska, at the northwestern extreme of North America, and the island state of Hawaii, in the mid-Pacific Ocean. The coterminous states are bounded on the north by Canada, on the east by the Atlantic Ocean, on the south by the Gulf of Mexico and Mexico, and on the west by the Pacific Ocean. The United States is the fourth largest country in the world in area (after Russia, Canada, and China). The national capital is Washington, which is coextensive with the District of Columbia, the federal capital region created in 1790. The U.S Census Bureau currently estimates the country’s population to be 321,282,000.  The U.S. population almost quadrupled during the 20th century, from about 76 million in 1900. The third most populous nation in the world, after China and India, the United States is the only major industrialized nation in which large population increases are projected. The United States is the world’s greatest economic power, measured in terms of gross national product (GNP). The nation’s wealth is partly a reflection of its rich natural resources and its enormous agricultural output, but it owes more to the country’s highly developed industry. Despite its relative economic self-sufficiency in many areas, the United States is the most important single factor in world trade by virtue of the sheer size of its economy. Its exports and imports represent major proportions of the world total. The United States also impinges on the global economy as a source of and as a destination for investment capital. The country continues to sustain an economic life that is more diversified than any other on Earth, providing the majority of its people with one of the world’s highest standards of living.